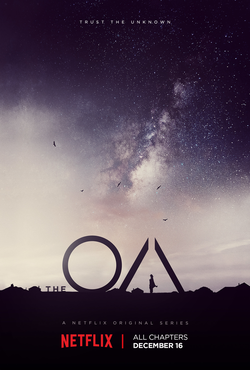 Netflix said The OA is being cancelled! That’s after only two seasons and with a cliffhanger ending.

Wikipedia says: “The OA is an American mystery drama web television series with science fiction, supernatural and fantasy elements. The OA debuted on Netflix on December 16, 2016. Created and executive produced by Brit Marling and Zal Batmanglij, the series is their third collaboration. The series consists of two seasons of eight episodes each, mostly directed by Batmanglij, and is produced by Plan B Entertainment and Anonymous Content. In the series, Marling stars as a young woman named Prairie Johnson who resurfaces after having been missing for seven years. Prairie now calls herself “The OA” (the “Original Angel”) and can see, despite having been blind before her disappearance.”

An opinion of an individual member or associate of The Loveshade Family does not necessarily reflect the views of the whole family.

I'm a Discordian American Princess, an editor of several Wikis, admin of The Discordian Wiki and SubGenius Wikia Clench, a college graduate, and a member of the Order of The Pineapple. Learn more about me at my website www.mileyspears.com
View all posts by Miley Spears →
This entry was posted in Discordian and Ek-sen-trik, Family and Friends, Media and News, Religion and Philosophy and tagged connie dobbs, cthulhu, discordian, juicy johnson, prairie johnson, subgenius, the oa. Bookmark the permalink.

10 Responses to Save The OA